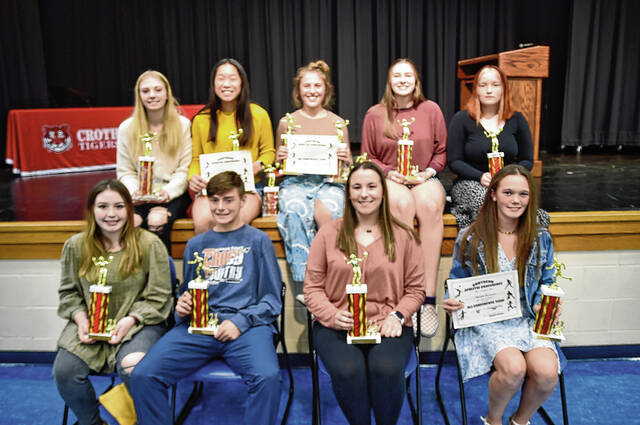 CROTHERSVILLE — Members of Crothersville’s high and middle school volleyball and cross-country teams were honored during an awards program at the school last week.

CHS athletic director Jacob Dunn said, “I’m doing what I can for the athletic department” and thanked the coaches for their hard work.

Dunn introduced the coaches who, in turn, presented special letters and awards to their team members.

Assistant volleyball coach Rita Cook said, “They (the volleyball girls) put in a lot of work in the spring and summer.”

Cook said the Tigers attended Munciana’s volleyball camp in Muncie this summer and were able to purchase new uniforms through their fundraiser.

The Tigers were then unable to play for two weeks (5 games) due to being quarantined by COVID-19. The junior varsity members had other issues with COVID and weren’t able to play a full season.

Crothersville (4-14) lost in the first round of the section to Trinity Lutheran, who finished second in the Class 1A state tournament.

“The Tiger Award is given to someone who demonstrates exceptional sportsmanship,” Blevins said. “Ella has improved throughout the year.”

Kennadi Lakins was named to the Southern Athletic All-Conference First Team and received the Strike Award, Haley Williams was named Most Improved and McKenna Newberry received the Setter Award.

Dirk Crater was named the Most Outstanding Rider for Boys with Andrew Stainbrook receiving the Tiger Award.

Plasse received the Tiger Award for Girls and was also named Most Improved.

“Ella was a great teammate and role model, and she qualified for the region,” Bowman said.

He said Kaylyn Holman was again named Most Outstanding Runner. She was the Southern Athletic Conference champion five consecutive years (including eighth year).

Holman and Plasse finished 1-2 in the SAC race.

Holman was a state qualifier his freshman and junior years.

“I’m blessed to have her running for me,” Bowman said. “She made me look good. She won so many races for Crothersville. I’m sure she has a lot of trophies back home.

QU will host the World Association Sport Management Conference in 2022