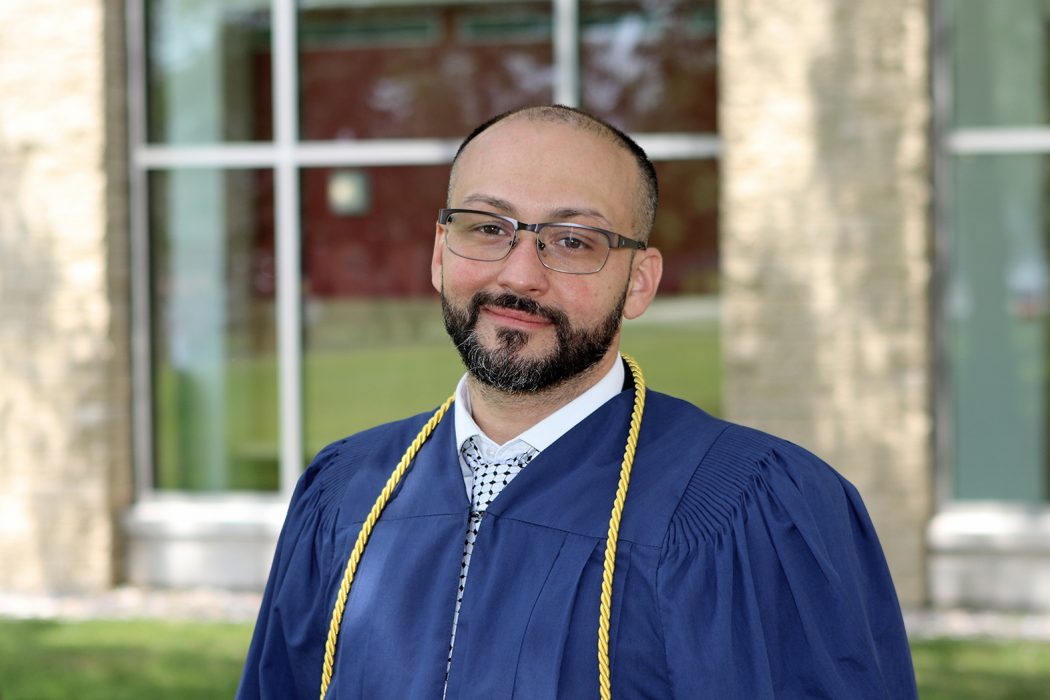 After years of feeling out of place, Moe Hussein has found a welcoming and inclusive community at Brock University.

The Sports Management major came to Brock as a mature student in 2020 after attending three other post-secondary institutions over the past 15 years. This week, along with more than 3,500 other graduating students, Hussein celebrates the long-awaited accomplishment of earning a Brock degree.

Hussein’s family immigrated to Canada in 2001 from the United Arab Emirates to pursue a better education for him and his three siblings.

Long before Hussein learned of Brock’s existence, he had his sights set on another Ontario university which his parents, after hearing great things, encouraged him and his siblings to attend.

After graduating from high school in 2005, Hussein did what his parents wanted and enrolled, but his college experience didn’t live up to his reputation.

Moe Hussein graduated with a bachelor’s degree in sports management from Brock University on Wednesday, June 15. Before dating Brock, Hussein spent 15 years following other educational paths and working in what he describes as unfulfilling roles.

“I faced tremendous hardship in the form of racist attacks from other students on campus and racist rhetoric from some professors,” he said. “Students were yelling at me and throwing things at me. I complained several times, but nothing happened. I left a year before graduation. This was not the place for me.

Hussein then moved to Toronto to continue his education at a second university. Although he enjoyed his experience there, he found it too expensive to live in the big city.

Feeling defeated, he returned to live with his parents a year later and attended a local college to pursue a one-year business degree.

After graduating, he worked in a variety of industries, including car sales, finance, and retail, but found the jobs unrewarding and stressful. Encountering what he called “abusive management and customers”, he developed symptoms of anxiety and depression.

To help relieve stress and feel a sense of accomplishment outside of work, Hussein started a non-profit soccer club.

“I wanted to give minorities and people like me the opportunity to develop their skills and become leaders,” he said. “I also wanted to help people with mental health issues use sport as a healthy way to express themselves.”

Hussein led the club for seven years, finding great joy in everything from playing and coaching to managing finances and planning marketing.

“It made me realize that I wanted to do this as a career rather than a volunteer role,” he said.

He researched the curriculum and discovered Brock’s Bachelor of Sports Management program.

“It’s the best decision I’ve ever made,” he said. “I felt welcome at Brock and proud to share my culture and heritage. The students were nice and friendly and made me feel comfortable. The teachers wanted me to succeed and worked with me to make sure I was on the right track.

Although most of his studies took place during the height of the pandemic, Hussein’s time at Brock helped him overcome much of his social anxiety.

“I felt like myself for the first time in years,” he said.

Hussein said he found a second home in Brock and plans to stay with his Brock family for a while longer. He was recently accepted into the Master of Arts in Sports Management program and will be working towards his degree part-time while he works and volunteers in the sports industry.

He has big goals for the next few years, but Hussein is confident he can achieve them with the continued support and encouragement of the Brock community.

The university establishes the first international collaboration in sports management