Several weeks ago I took photos of Jonathan Frady competing in a track meet at Cherokee High School (CHS). Then, less than an hour after it ended, I snapped pictures of him pitching six innings in a campus baseball game.

In the last decades that I’ve covered sports at the CHS, it’s been the norm rather than the exception for student-athletes to compete in more than one sport – some in the same season. This academic year alone, I covered Frady, a recent CHS honors graduate, in several sports, including football, basketball, track and field, and baseball.

Jonathan Frady, a recent CHS honorary graduate, pitches a baseball game at Cherokee High School less than an hour after competing in a track meet. He also participated in football and basketball at the CHS. (photos SCOTT MCKIE BP/One Feather)

The same is true for boys and girls. Jaylynne Esquivel, one of the area’s top track and cross-country runners, is also a wrestler on the school’s varsity team.

Many of the CHS athletes participate in many sports for several reasons. First and foremost, it’s a very small school and there are a limited number of athletes. Second, many do it to stay in shape and maintain their competitive edge.

Hockey legend Wayne Gretzky once said, “I’ve played it all. I played lacrosse, baseball, hockey, soccer, track and field. I was convinced that you played hockey in the winter and when the season was over you hung up your skates and played something else.

The Michigan High School Athletic Association released survey results several years ago that found that 43% of student-athletes in the state participated in more than one sport. And those rates increased as school size decreased, with Class D schools (equivalent to 1A schools in North Carolina) reporting the highest rate at 61.8%.

The National Federation of State High School Associations (NFHS) actually encourages multi-sport participation and discourages specialization in a single sport. Information from the organization states: “A study by the University of Wisconsin School of Medicine and Public Health, which included more than 1,500 high school athletes, found that sports-specialized athletes were twice as likely to report a lower extremity injury compared to those who played multiple sports. 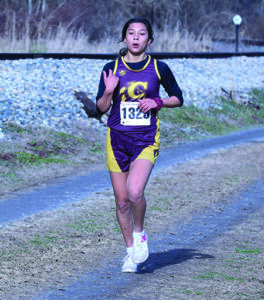 Jaylynne Esquivel runs en route to a second-place finish at the 1A Cross Country Championship in January. She also competes in athletics and college wrestling.

He continued: “Another recent study published in the American Journal of Sports Medicine has even higher numbers, claiming that spending more than eight months a year in a sport leaves young athletes almost three times more likely to suffer a excessive hip or knee injury. .”

The NFHS also indicates that participating in multiple sports can have lasting positive effects beyond high school. “In a study of over 14,000 12and students, young athletes who participated in multiple sports as children were found to be more likely to exhibit healthier behaviors later in life, such as exercising vigorously every day, getting at least seven hours of sleep regularly, be less likely to smoke and be more likely to eat green vegetables. They also seem to have higher levels of self-esteem and social support, and lower levels of loneliness and self-mockery.

While all of these are great reasons to participate in multiple sports, one important aspect that cannot be overlooked is the student-athlete’s sheer desire to stay busy and competitive in a variety of settings.

Whatever the reason, it’s great to see young Cherokee athletes competing, having fun and being healthy.