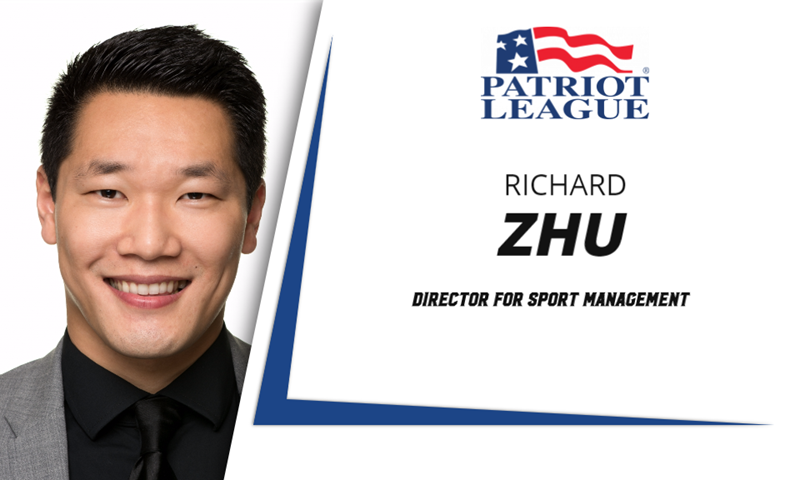 CENTER VALLEY, Pennsylvania – The Patriot League has announced the hiring of Richard Zhu as Director of Sports Management. Zhu joins the League after spending four years at the NCAA office in Indianapolis, Ind.

In his new role, Zhu will oversee the work of the League’s athletic committees, including the implementation of policies and procedures related to League sports governance and serve as the primary liaison with the Patriot Sports Management Committee. League. He will lead the League’s Student-Athlete Advisory Committee (SAAC), including supporting activities related to student-athlete participation in League and NCAA governance structures, and increasing connectivity between the League and its student-athlete leaders.

“Richard’s enthusiasm and passion for the academic, athletic and personal growth of student-athletes is a perfect fit for the League.” said commissioner Jennifer Heppel. “Richard has excelled as a student-athlete and more recently with the NCAA National Board, and we are thrilled to welcome him to the Patriot League.”

“The Patriot League is a conference of some of the Association’s top academic institutions where my values ​​for the holistic student-athlete experience are directly aligned,” Zhu said. “I am honored and thrilled to serve its members and its incredible student-athletes as they pursue academic, athletic and social excellence; just like in my own experience as a student-athlete.

While at the NCAA National Office, Zhu served as a coordinator in the Office of Inclusion, where he worked with Dr. Amy Wilson, Director of Inclusion. He worked directly with the NCAA Committee on Women’s Athletics and oversaw the day-to-day operations of the NCAA Emerging Sports for Women program for equestrian, rugby and triathlon. He was also selected as chair of the NCAA National Office Advocacy and Communications Team for the 2016–17 academic year.

He was also appointed by Dr. Bernard W. Franklin, Executive Vice President of Education and Community Engagement/Chief Inclusion, as the International Student-Athlete Officer and provided leadership in the area of ​​student-athletes with disabilities. In this role, he engaged with NCAA members and the United States Olympic Committee on strategies to increase opportunities for student-athletes with disabilities and hosted several delegations from international sports organizations.

At the NCAA, Zhu has also established national events and initiatives to celebrate student-athlete achievements, managing the project team and hosting NCAA Inclusion Forums for the past three years. He also led national efforts for the 2015 and 2016 NCAA Woman of the Year awards, the highest honor the Association bestows on a graduating student-athlete.

Prior to working in the NCAA office, Zhu worked as a digital marketing analyst at Microsoft Corporation in San Francisco, California, where he helped implement digital marketing campaigns for corporate clients.

Zhu, a native of Medford, Oregon, received his bachelor of science degree in political science from Santa Clara University (California) in 2012. He was a four-year winner on the men’s track and cross-country teams, where he was selected as the program’s Most Valuable Track Athlete during his senior season. He was also a member of the Student-Athlete Advisory Committees (SAAC) of Santa Clara and the West Coast Conference for two years. Zhu then earned his MBA from Indiana University Kelley School of Business in 2017.

The Patriot League is in its third decade of academic and athletic achievement, continually demonstrating that student-athletes can excel both academically and athletically without sacrificing high standards. The Patriot League’s athletic success is achieved as its member institutions remain committed to its founding principle of admitting and graduating student-athletes who are academically representative of their class. Participation in athletics at Patriot League institutions is considered an important part of a well-rounded education.