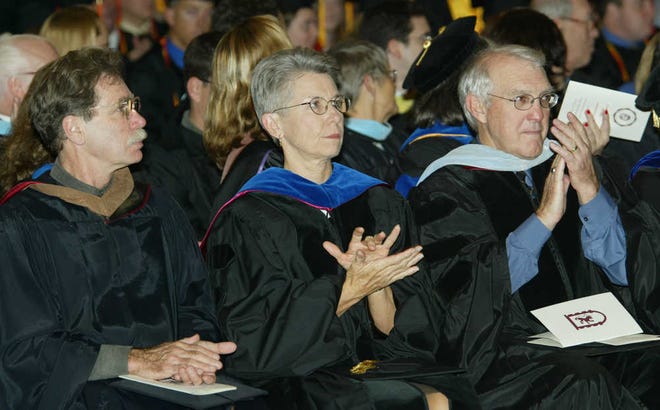 Sitting in her second-floor office one day recently, Bernadette Twardy begins to recount her 30-year career at Flagler College, a career that will end when she officially retires after the end of the spring semester.

When Twardy accepted the position in 1984, she had no idea where Flagler was and expected it to be a relatively brief hiatus before encountering other new challenges as she rose through the ranks of academia.

Instead, she arrived and never considered leaving. She became the architect behind the development of the school’s sports management program, and she found it at home. More importantly, she found her family – her students.

“I love my students,” she said, holding back tears. “That will be the hardest thing to give up: the daily interaction with my students. They are the love of my life, and I can’t tell you how amazing the past 30 years have been for me.”

Students made the difference

Hanging on the wall in a hallway just outside Twardy’s office is a collection of photos celebrating the accomplishments of many graduates of the sports management program.

Twardy affectionately named it the “Sports Management Wall of Fame,” and there have been some impressive accomplishments.

Graduates of Flagler’s sports management program have gone on to work for all four major professional sports, the International Olympic Committee, the PGA Tour and Wimbledon, among others.

“I can’t say enough about my students,” Twardy said. “It was magical. No one had as much fun as me.”

Jeffrey Davitt, now a development officer for Flagler’s Office of Advancement, was a senior in the sports management program looking for an internship when he first realized how Twardy and the program had become widely respected.

Davitt applied for an internship with the Miami Dolphins, but with no real ties to the team, did not expect to hear from them. Instead, he was interviewed by the team’s vice president, who told him she was very familiar with the respected reputation of Flagler’s sports management program. Shortly after the interview, he was offered the internship.

“I owe everything to the program and to Dr. Twardy,” he said. “Without them, I wouldn’t have had this opportunity, which led to other great things that I was able to experience.

“I don’t think I would be where I am today without her. She instilled the right values ​​in us so that whatever path we chose in life, we were well prepared for it.”

The program is growing

Davitt’s success story is one of many, but highlights how far the program has come in a short time.

Twardy came to Flagler, after earning her doctorate from Florida State, as chair of the physical education and recreation management program, as well as a women’s basketball coach. (“I quickly found someone else to get this off my lap,” she joked.)

At the time, there was no sports management program at Flagler. In fact, there were very few in the whole country. But after about a decade at school, Twardy realized times were changing. Fewer and fewer students were seeking to become physical education teachers.

One year she did a review and found that the program was no longer profitable. So, at the request of William Abare Jr., who is now president of Flagler but was then academic dean, she began researching other programs and identified sports management as a growing area of ​​interest. After more research and returning to the school itself to become certified, Twardy and Flagler started the sports management program with two classes in 1995.

There were 27 students in the first year, 79 in the second and 109 in the third, Twardy said. After that, she couldn’t remember the exact numbers, but the program averages about 165 students a year and has become one of Flagler’s top programs. Including the seniors who will graduate next December, Twardy will have had 503 graduate students in sports management.

Those who were there to see the program flourish were simply amazed.

“She saw the writing on the wall for her students,” said Elsa Brader, a longtime friend of Twardy’s who also taught in the physical education department. “There were no more jobs for physical education teachers. Those programs were changing. So Dr. Twardy goes back and gets another degree in sports management and makes it his goal to make the program happen. stands out at Flagler College.

“It was because she had the foresight and the intuition to realize that education was changing. It was bold for Flagler College. Sometimes I marvel at the wisdom she has.”

“As for Bernadette, any college president would love to have 50 or 60 like her,” said Chancellor William Proctor, who served as the school’s president from 1971 to 2001. “I tried to discourage her from retiring, but I was unlucky. She will be missed. She is a rare breed and what she did with the sports management program was very important.”

Even the usually reserved Twardy couldn’t contain a full smile as he spoke of the program’s growth over the years.

“You just remember the happy times,” she said. “Until it took on a life of its own, I’m sure I was stressed, but I’ve had so much support from the administration here. I always knew I wanted to create a concept and a culture of professionalism which I think is absolutely crucial to entering the job market. It has been an incredible journey.

Always on top of his game

Twardy knows all about professionalism.

Students shouldn’t wear hats or rest their heads on desks while she teaches, and seniors can expect to have at least one 8 a.m. class to better prepare for the real world.

But she also knows how to have fun.

“She’s a great golfer,” Proctor said. “I love playing with her, but I had to cheat to win. She’s such a nice person to play golf with. We’ve enjoyed many rounds together.”

Twardy’s golf prowess is well known. She is a two-time champion of the Flagler College President’s Golf Classic, once she landed a hole-in-one that left a group of onlookers in awe.

Brader recalled the pair playing a round at St. Johns Golf Club when a foursome of men playing in front of them waved them through.

“Usually my reaction is, ‘Oh, boy. Hopefully I can get the ball up there,’” Brader said. “Instead, Bernadette gets up to hit the ball, goes through her usual routine, hits the ball, and it lands on the green and is 3 feet from the pin. We get up there and all the guys say , ‘Wow. Great. shot, great shot. And, of course, I was just like, ‘Yeah. That’s my golf buddy.'”

Twardy will have more time for other activities after his retirement. In addition to playing golf, she has been teaching golf in the community for over 20 years. She plans to do more and is excited about a few other volunteer opportunities she would like to get more involved in in the months ahead.

That said, she knows how difficult it will be to leave teaching for good after such an illustrious career. She joked that she might come back for the first teachers meeting of the new school year, but she’s pretty serious when she says she’ll always be part of Flagler.

“It was so much fun and the most rewarding thing I’ve ever done in my life,” she said. “I fell in love with Flagler, and I wouldn’t trade him for the world.”