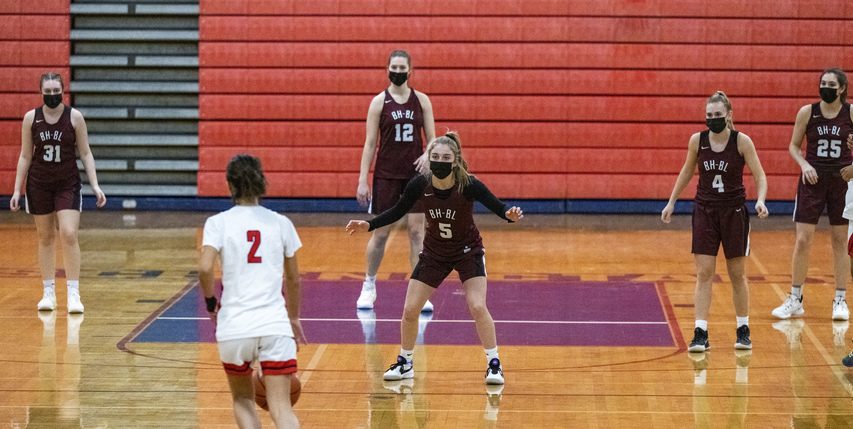 SCHENECTADY — Ella Blesi played a key role in the success of the Burnt Hills-Ballston Lake basketball team at Schenectady on Friday night with her high volume of steals and assists.

Her Spartans teammate Carlie Rzeszotarski finished the first half with a layup and added four more early in the third quarter to help the Spartans retire in what was a 38-point victory.

Not too bad for a young couple best known for their exploits in other sports.

“They’re athletes,” Burnt Hills coach Gary Bynon said of Blesi, Rzeszotarski and his three other starters. “They like competition.”

Burnt Hills is competing – and winning – with a unique roster of five multi-sport athletes starting for Bynon who is one of the most successful women’s volleyball coaches in state history. Only one of those five starters – Grace O’Connor – considers basketball her primary sport.

“We just want to win,” O’Connor, a junior, said after scoring a team-high 16 points in her team’s 63-25 Suburban Council victory at the Pat Riley Sports Center. “It doesn’t matter what the sport is.”

O’Connor also plays lacrosse, as do fellow starter MK Lescault – who has signed up to Johns Hopkins to play the sport – and Blesi. With Blesi, Lescault also plays football. Also in the starting lineup are volleyball stars Rzeszotarski – who has committed to playing the sport at Colgate – and Callie Chevalier, the seniors who led the Spartans to their eighth state championship in the sport during the campaign. fall — and the next star volleyball player at school could be Sarah Robbins, a freshman who came off the bench Friday and contributed five points and eight rebounds.

“You don’t see it anywhere else,” Blesi, a junior, said of the Spartans’ multi-sport athlete mix that also includes reserves. “It’s more a matter of culture. The students want to play.

“It’s more fun to play than not to play,” O’Connor added.

Burnt Hills students, Bynon said, are encouraged to participate in more than one sport.

“The coaching staff and the phys. education staff work together. We want children to participate and we promote it. We’ve created an atmosphere where it’s okay to play multiple sports,” said Bynon, who led the women’s volleyball team to their eight New York crowns and also has a Section basketball title. II in boys on his coaching resume. “were [one of the smaller schools] in the league, so it’s great for our school district and it’s good for the kids.

Veteran Schenectady women’s basketball coach Carol Lupo has seen Burnt Hills’ athletic program rise over the years to become one of the most successful in Division II.

“Burnt Hills is doing a really good job of making his athleticism a priority. Things have changed for them,” Lupo said. “They’ve developed a mindset of having athletics in their programs.”

The Burnt Hills girls’ basketball team used their athleticism and superior size to wear down Schenectady. O’Connor’s 11 points helped the Spartans take a 25-10 halftime lead before Rzeszotrski and Blesi triggered a third quarter.

“Not everyone’s No. 1 sport is basketball, but we’re all athletic,” O’Connor said.

They hook up just as quickly.

“With athletes, you can do different things,” Bynon said. “We didn’t practice having Ella on the foul line, but we wanted her to distribute from there because we saw something in their defense.”

Blesi had eight assists and five steals to go along with his seven points against Schenectady. Rzeszotarski finished with 14 points and Chevalier – the only other senior on the team – had seven rebounds, four steals and four assists to go with five points.

“We just want to win, no matter the sport,” O’Connor said.

Bynon said his team (8-6) continues to improve and with one more win will be the most for the Spartans since the 2005-06 season.

“I’m happy where we are at this point, but we haven’t played our best game,” said Bynon, who saw his 10 players reach the scoring column on Friday. “We’re working on things and getting better.”

Schenectady got strong performances from Izabella Hempstead, who scored 12 points, and Anya Hernandez, who had eight rebounds and blocked two shots.

“My children have shown incredible courage in the face of the challenges we have faced this year,” Lupo said. “We started with 10, lost two and have one injured [scoring leader and lone senior Janessa Jones]. These seven children, day after day, played as hard as they could.

More from The Daily Gazette:

Life as an Athlete and Sports Management Student