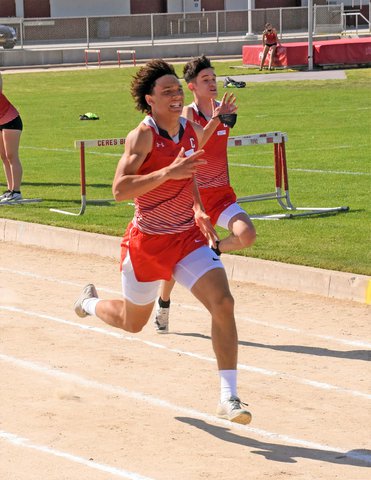 “I push myself to the limit,” Smith said. “Some people say it’s bad. It’s funny. I love it. It’s tiring. But that’s what I do. I am a multi-sport athlete. Sport is my life. Sundays are my days off. I’m not doing anything.

Smith won gold medals while competing at the Western Athletic Conference track and field championships on May 15 at Patterson Community Stadium.

“For him to be able to do that is pretty special,” Johnson said.

“Competition has motivated me to do better than everyone else,” added Smith. “I surprised myself with the times I put up. As a sprinter, you need to stay relaxed. If you’re tense, you’re not going to run the times you want to run.

Smith also teamed with Gonzalo Rivera, Samar Singh and Luis Yepez to finish in third place in the 4×400 relay (3:41.15).

He was rewarded for leading the Bulldogs to a 4-0 league record.

Smith was a WAC honorable mention selection in ninth grade.

He caught 16 passes for 348 yards and three touchdowns as the Bulldogs went 2-2 overall and finished fourth in the WAC South standings.

Smith ranked first on the team in all three offensive categories.

He rushed for 198 yards and two touchdowns, both team highs, on 20 carries.

He also completed 10 of 17 passes for 160 yards with a touchdown and an interception.

“Verlis has done a lot of good things this year,” said head coach Clinton Goblirsch. “He was our go-to guy on the outside. He made plays for us when we needed him.

“He wants to succeed in everything he does,” he added.

Smith likely would have received full conference recognition in men’s basketball had he played all season.

He missed both games against top-placed Los Banos after being placed in COVID quarantine for the second time.

The Bulldogs finished second in the WAC South standings (5-3).

He scored a team-high 19 points in a non-league game against the mighty Modesto Christian.

“Verlis is a workaholic,” he added. “He’s versatile with his size, strength and speed… Big things are expected of him (next year).”

Espinoza played softball, volleyball and wrestling in his senior year at Central Valley.

She had a 4.7 GPA and was enrolled in four advanced placement classes.

Espinoza also has a part-time job.

“It was pretty hectic,” she said. “There were days when I practiced three sports at the same time. There were points I wanted to give up. I kept pushing because I wanted to end the year strong.

“My coaches were flexible,” Espinoza added. “They let me leave practice early or skip it if I had a lot of homework to catch up on.”

Espinoza’s last year of wrestling consisted of only two scrums due to COVID-19 safety and transportation concerns.

“Wrestling was my favorite sport,” said Espinoza, who competed in the heavyweight division. “That’s where my mental strength comes from. It pushed me where I had never gone before.

“Sammy has a great attitude,” Central Valley coach Rob Beckhart said. “She works very hard. She’s not one to back down from a challenge. She’s done a lot for our program. I can’t say enough good things about her.

Espinoza assisted with the opening goal as the 8-7 Central Valley softball team posted a league winning record for the first time in program history this spring.

“It was such a fun experience,” Espinoza said. “She helped me improve in both sports. She helped bring out my confidence. She was my mentor. She was also my teacher. We are quite close.

“Sammy is really sweet and always positive,” Selfridge said. “He’s someone you want to be with.”