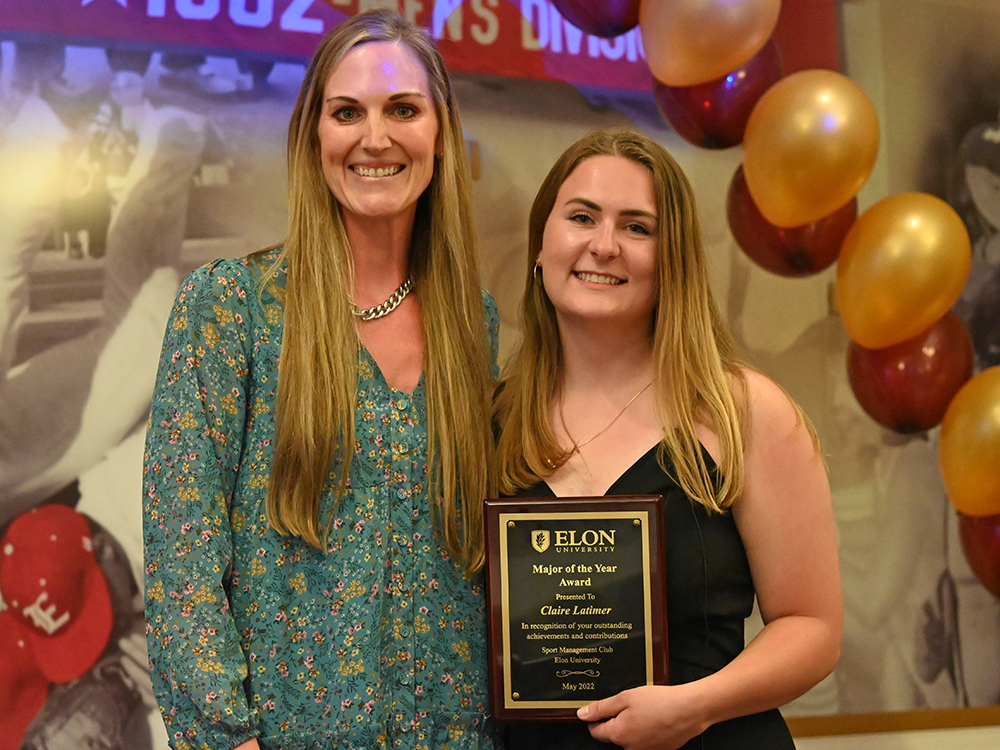 Among the winners were Claire Latimer ’22, who received the Major of the Year award, and Brynja Burton ’25, who won the Rising Phoenix Award.

The Sports Management Department hosted its Senior Banquet and Awards Ceremony on May 2, recognizing the top performing members of its class for their achievements, service and perseverance.

The annual event kicked off at the Alumni Field House with a dinner followed by remarks from senior alumni Chuck Steines and Ashley Stuart, as well as Associate Dean Tony Weaver. A theme developed through the trio’s comments, underscoring the department’s willingness to support each other – especially in the face of a pandemic.

Photos of the banquet are available on the School of Communications’ Flickr page.

In their informal talks, Steines explained how close he had grown to his classmates and that he would be there to talk as they faced uncertainty together in the next stage of their lives. Stuart, who landed a job as a ticket sales representative with the Memphis Grizzlies after graduation, thanked her faculty members for their unwavering support. Finally, Weaver offered a reflection on the students’ four years under the oaks and how they endured and succeeded in the many challenges they faced.

“When the going gets tough, the best step forward,” Weaver said, imploring future graduates to adopt this strategy in their professional and personal lives. “Everyone is happy and excited when you win. The hardest part is when things don’t go so well.

He encouraged students entering the job market to take nothing for granted and to seize opportunities when they arise.

Following Weaver’s remarks, the department presented several awards, including its Major of the Year award to Claire Latimer, who achieves a GPA of 3.8 and several undergraduate research projects to her credit, including a presentation at the AEJMC South-East colloquium 2021.

Olivia Lovell ’23 also received the James P. Drummond Service Award, named for the founding department manager of Leisure and Sport Management (later renamed Sport Management). The award is given to a student in recognition of outstanding contributions to Elon University and the campus community.

The event was hosted by Latimer and Taylor from Castro ’22.