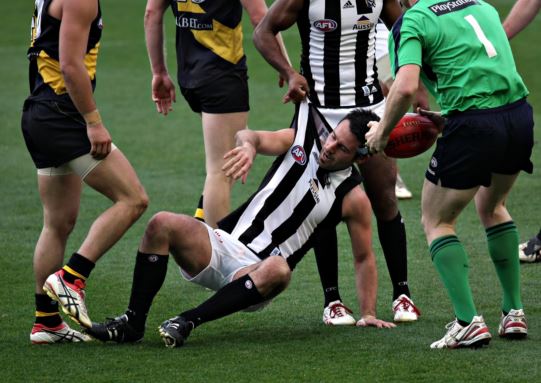 New research from Monash University on brain changes after a concussion indicates that the brain remains injured and potentially vulnerable after more than two weeks, raising concerns that new AFL concussion guidelines may still allow athletes to return to play before the brain has fully recovered.

In a paper published in the journal Cerebral Cortex, Monash researchers performed MRI scans on concussed athletes from amateur Australian Rules football clubs in Melbourne 48 hours and 2 weeks after their concussion, and compared them to non-concussed athletes. .

The study, led by associate professors David Wright, Richelle Mychasiuk and Sandy Shultz, of Monash University’s Department of Neuroscience, found – even after 2 weeks post-concussion when athletes were allowed to return to play ( and most importantly, when athletes reported no symptoms of concussion) – clear signs of changes indicative of white matter damage in the brain, detected by MRI.

According to Associate Professor Wright, the findings raise concerns about new guidelines announced by the AFL earlier this year, which specify a minimum 12-day return-to-play protocol after a concussion. “While a step in the right direction, this data indicates that players may still return to play too soon, with brain injuries potentially exacerbated by further blows to the head,” he said. -he declares.

The paper also provided initial evidence that the brains of AFL men and women may be affected differently by concussion. Although men and women had differences that persisted for 2 weeks after the concussion, women appeared to have fewer injuries than men. According to Associate Professor Wright, “Further research is needed to confirm these preliminary results – however, we are in a unique position internationally to conduct these studies given that similar rules are in place for the AFL codes of males and females. women,” he said. This is not the case in other popular international collision sports such as American football and ice hockey.

Although it is currently not possible for every individual with a concussion to have an MRI, Associate Professor Shultz says this study confirms their group’s previous research published earlier this year, which found biomarkers blood tests for brain damage present in players more than 2 weeks post-concussion.

Aussie rules football is the most popular collision sport in Australia – with an average of 6-7 concussions occurring every 1000 game hours in amateur and professional leagues. Despite this high incidence of mild traumatic brain injury, there have been few studies on the long-term neurological damage associated with the sport and how to prevent it.

Associate Professor Shultz said there is significant global interest in a blood test that could monitor an athlete’s recovery from a concussion. “Currently we rely on athletes telling us when they are symptom free or using cognitive tests, which have reliability and validity issues,” he said.

“A blood or saliva test, which we have now shown to be supported by MRI of the brain itself, would allow doctors to monitor an athlete’s brain recovery and help ensure that he only return to play when fit to do so.”

He added that since concussions are a major problem in sports around the world, such a test would have a global market. In the United States, a large number of former National Football League (NFL) players have been diagnosed with chronic traumatic encephalopathy (CTE), a progressive neurodegenerative disease caused by traumatic brain injury leading to premature deaths often associated with dementia or violent behavior. The NFL recently settled a class action lawsuit mounted by 4,500 former players in 2012 for $765m (A$1bn) and there have been similar class action threats from former NRL players and the AFL.

Smith of ETSU co-authored a book on sports management | Living