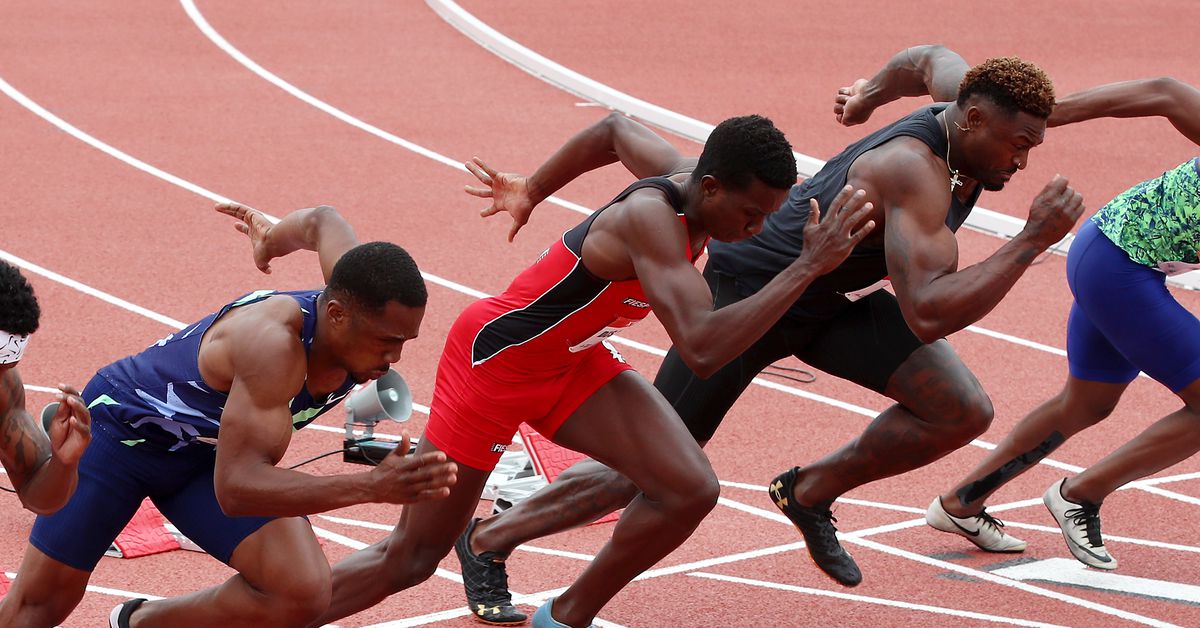 Isn’t playing college or pro football hard enough? Apparently not for the fiercest competitors. The big story last weekend in the NFL was how Seattle Seahawks wide receiver DK Metcalf ran in the 100 yards at the USA Track and Field Golden Games and Distance Open Sunday. While Metcalf failed to qualify for the Olympics against many of the fastest sprinters in the country, this of course raised the question of the level of talent that exists for professional athletes, who can simply jump and run with the peloton (or at least in the back side) at an elite event.

These sorts of stories always tend to bring to mind the perfect, symbolic example of a multi-sport athlete: the one and only Jim Thorpe, who played professional football and baseball AND won gold in the pentathlon and decathlon at the Olympic Games in Stockholm in 1912. Literally the two Olympic events which required the most varied athletic talents.

Of course, these types of discussions prompt talk about what really defines athletics (one of my favorite table conversations and the one in which Thorpe always comes out as the big winner), but also what is the optimal sport to associate football ?

There are obvious links between sports when you see certain athletes excel. For example, when it comes to baseball, we’ve recently seen a surge of NFL starting quarterbacks who were also drafted by MLB teams (Kyler Murray, Russell Wilson, Patrick Mahomes). Again: NFL starting quarterbacks who also had the opportunity to play professional baseball — that’s banana level athleticism. There is definitely a correlation between arm strength and accuracy involved in throwing a baseball and passing a soccer ball that lends itself to this particular pairing.

Then, of course, there are the receivers who excel on the track – like Metcalf. We’ve seen many collegiate wides also compete in sprints and hurdles in particular, and even those who didn’t race at the collegiate level were high school track stars (e.g., Ted Ginn Jr.). It obviously falls to the receivers to be fast, to be able to accelerate over short distances – like less than 100 yards – and to be able to clear obstacles. Track can also be one of the best types of off-season training for receivers because it’s literally repeated conditioning drills.

And then there are the less common but no less important examples of basketball. How many times have we heard about how retired tight end Antonio Gates played basketball in college? “HE JUST CAME UP FOR THIS TAKE!” still echoes in my head. Even this year on March Madness, we got to reminisce about how Ryan Day once recruited Gonzaga’s starting point guard, Jalen Suggs, to play quarterback for Ohio State.

There are naturally logistical challenges that prevent great soccer players from also being great basketball players, namely seasonality. It is difficult to practice sports that can overlap in time, especially football which has training times as long as some other sports.

On that note, we have to look at high school athletics – the last time many athletes had the chance to play multiple sports, and ask the question of when should athletes differentiate themselves? We all knew these extremely talented athletes in high school. There were some who laser-focused from an early age on a single sport. In some areas it was easy, for example, for great basketball players to play AAU and focus on hoops 12 months of the year. Then there were others, for whom it was more accessible to be a jack-of-all-trades who could jump in and be really good at any sport.

There is also the consideration of the athletes, especially in the small secondary schools, who almost “have to” practice several sports because there are simply not enough children to fill the teams, and who therefore , naturally excelling in a few different events. Finally, there are the athletes who, either due to lack of personnel in the team or because of their own athleticism, have played on both sides of the ball, especially in football.

That being said, there is a balance, and at some point even the most talented athletes become jack-of-all-trades and masters of none, ultimately having to choose a sport (or position) to play in. university or, if they go that far, professionally. This is because the level of talent they compete against is also high as positions become more specialized. It is not enough to be a very good receiver and a very good defensive back – athletes must be Great in their chosen position.

For some coaches, this differentiation can wait. We saw how Urban Meyer, during his days as a college football coach, liked to recruit players as athletes and just hang in there and see how those players would develop and fit into the team. Apparently he still likes to follow that tac in Jacksonville, if picking up Tim Tebow is any indication. There’s a reason Braxton Miller was able to switch to receiver, when such a move might not have been possible in other training regimes. It makes sense in college, especially when coaching teams bring in players who are still developing in size and ability.

Frankly, this strategy is also what John Gruden did to carry on the legacy of Al Davis with the Raiders. We’ve seen how it worked at the NFL level, where players are already highly skilled and being an amazing athlete is no longer enough.

To come full circle, there are athletes who somehow have the athletic ability to play more than one sport. Ultimately, it’s a rare but very cool thing to see athletes achieve success outside of football or basketball or whatever sport they choose. It’s a whole other level of athleticism.