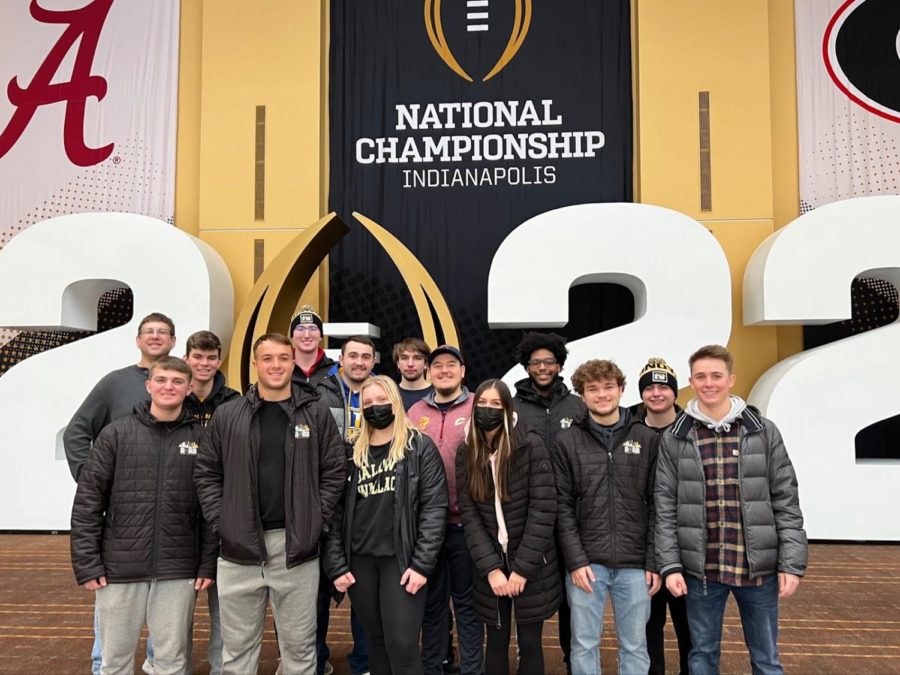 The college football playoffs consist of the top four seeds in NCAA Division 1 football. The first and fourth seeds play each other and the second and third seeds play each other. This year, 4th-seeded Cincinnati faced number-one seeded Alabama in the Cotton Bowl Classic on Dec. 31 at AT&T Stadium in Arlington, Texas, home of the Dallas Cowboys. Second-seeded Michigan played third-seeded Georgia in the Orange Bowl on Dec. 31 at Hard Rock Stadium in Miami Gardens, home of the Miami Dolphins. The winners of those two games would compete for the CFP Championship in Indianapolis, Indiana on Jan. 10 at Lucas Oil Stadium, home of the Indianapolis Colts.

Alabama beat Cincinnati 27-6 and Georgia beat Michigan 34-11. Both teams are reportedly preparing to travel to Indianapolis for the championship on January 10. Meanwhile, a group of BW sports management students would also be preparing for Indianapolis as volunteers for the CFP.

Students in the Sports Management program have several unique opportunities throughout their time at BW. In the past, the program has been invited to volunteer at previous Super Bowls, the Kentucky Derby, Formula 1, and the 2021 NFL Draft. The CFP is one of many BW student volunteer opportunities every year.

The trip consisted of 14 students accompanied by Professor Tony Dick. It lasted four days and the four days were filled with activities and volunteering. The students traveled to the Indiana Convention Center and attended Playoff Fan Central, a fan experience event where they met several alumni from the Alabama and Georgia programs and were able to network with other cast members from the sports industry. “By attending the College Football Playoff National Championship game each year, our students have the chance to understand what it takes to plan, organize and execute one of the greatest sporting events in the United States.” said Professor Dick. The students also traveled to the Indianapolis Motor Speedway, home of the Indy 500, where they toured the museum and took a spin around the racetrack.

The students were part of the ‘Green team’ as part of the Playoff Green sustainability program. This sustainability program “strives to minimize the environmental footprint of the National Championship Game and its ancillary activities. The students volunteered at the Indiana State Museum’s “Taste of the Championship” event for a dinner and fundraising event. At this event, students told attendees where to throw away their waste, whether recycled, compostable, or trash, and educated them on what was compostable and how their efforts are reducing the environmental footprint. “This year on game day, our students participated as part of the ESPN Green Team, an effort focused on sustainability and an effort to minimize the environmental impact of major sporting events in the United States,” said the Professor Dick. “This is done by minimizing ventilator waste and making a more conscious effort to recycle where possible. This really serves our students well as it gives them the opportunity to not only see the game, but also leave knowing that you have made an environmental difference.

On Monday, January 10, the students gathered in a meeting room where they were escorted to Lucas Oil Stadium to volunteer with the ‘Green team’ in another effort to reduce the environmental footprint during the championship game.

Provide training in sports management to