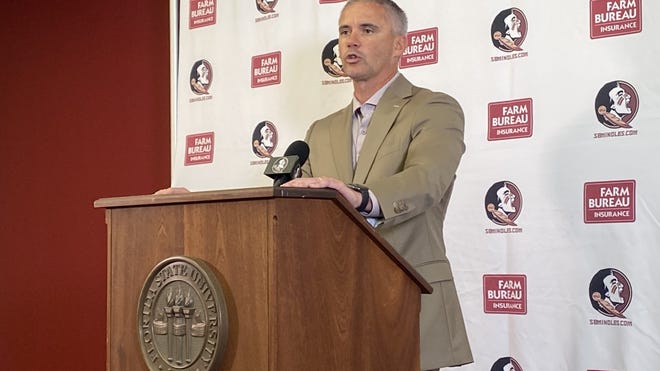 Sammie Smith’s goal was to play two sports – football and track and field – at Florida State.

“It was definitely an added incentive that you could do both and you had a coach and a school that helped you do that,” said Smith, who signed with the Seminoles from Apopka High in 1985.

“It’s different today. It seems like more kids, when it comes to athletics, are spending all their time with just one sport.

“This is my camp”:Remembering Bobby Bowden’s love for golf

“He looked so relaxed”:Remembering Legendary FSU Coach Bobby Bowden’s Love for the Bible

Bowden, who died last Sunday of pancreatic cancer at the age of 91, recruited and signed stars from two top sports who also excelled in multiple sports at FSU. Bowden followed a similar path – he played football, baseball and ran track at Howard College (now known as Samford University).

Unsurprisingly, Deion Sanders – a rare three-sport star with the Seminoles – is considered FSU’s most versatile athlete. Bowden also said Sanders was the best athlete he ever coached.

Sanders, the first-year Jackson State coach who is a scheduled speaker at Bowden’s funeral Saturday at Tucker Civic Center, was also the first professional to play in a Super Bowl and World Series.

Sanders played football, baseball and ran track at FSU. In 1987, when the Metro Conference held its baseball tournament and track and field championships in Columbia, South Carolina, the Sanders legend was born.

Between games of a doubleheader, the outfielder changed into his track uniform and ran the Seminoles 4X100 relay leg. FSU won the relay and both doubleheader matches.

In 1988, Sanders won the Jim Thorpe Award as the nation’s top defensive back.

“Only One: Bobby Bowden”

Charlie Ward, of course, was a star quarterback for the Seminoles.

He led FSU to the 1993 national title and also became the program’s first Heisman Trophy winner that year.

In 91 career basketball games under coach Pat Kennedy, he tallied 396 assists and helped lead FSU to the NCAA Tournament Sweet 16 in 1992 and the Elite Eight in 1993.

Ward, the Florida High boys’ basketball coach, who is also scheduled to speak at Bowden’s funeral, played 10 seasons in the NBA.

“How many football coaches would share a Heisman Trophy quarterback with the basketball team? Only one: Bobby Bowden,” said Kennedy, who is scheduled to travel from his home in Dorian, Connecticut, to Tallahassee on Friday.

“In an ironic twist, Coach Bowden helped build the basketball program that FSU enjoys today. He was a friend, mentor and supporter of our program and myself.

So did Smith, who achieved his goal and played football and ran at FSU.

He rushed for 2,539 career yards to rank seventh all-time in school history. He also won the Metro Conference 100 and 200 meter titles and also ran on the Metro Championship 400 relay team.

Warrick Dunn was another two-sport star who benefited from Bowden’s commitment to his players. Dunn — ranked second all-time in rushing yards with 3,959 — also earned All-American honors in the 4X100. Dunn is also set to speak at Bowden’s funeral.

Smith, who joined the staff of the Fellowship of Christian Athletes at Ole Miss in 2016 and is the organization’s character development director for the football team, however, made Bowden’s heart flutter when recruited.

When Bowden stopped by Smith’s home for an official recruiting visit, he expected Smith to commit to the Seminoles.

“I gave them a ride,” Smith said with a laugh.

“I thanked the coach for signing me and told them they had done a great job – but I wanted to go to Michigan. You could have heard a pin drop in our living room. I said: ‘Guys, just kidding, I’m a Nolé.

“Coach still remembered it after all these years.”

No one covers the ‘Noles like the Tallahassee Democrat. Subscribe using the link at the top of the page.